In British Columbia, local government is considered the most accessible level of government:

The citizens of the District of Sooke voted to become a municipality in 1999 and upon incorporation elected their first Mayor and Council . This first Council began the ongoing task of establishing bylaws and policies for the planning for the community’s future and for the provision of services.

Local Government in BC – A Community Effort (UBCM, LGMA, Ministry of Community Sport and Cultural Development)

Local government provides many opportunities for its citizens to participate in the planning and management of their own community. A citizen may:

As a citizen of the District of Sooke, you may at any time make your views known. It is usually best to begin with the contacting the appropriate municipal department or staff person, but citizens may also present their views to Council in writing or in person at a Council meeting.

In order to appear before Council as a delegation at a Council Meeting, you need to submit a written request to the Corporate Officer by 4:30 pm on the Tuesday before the scheduled Council Meeting. The request can either be by way of this form or a separate letter that you have written which contains the information requested on this form. You can submit your request in person, by mail or by fax at 250-642-0541

If you wish to make a presentation to Council or let Council know how you feel about an issue, please contact the Corporate Services.

Some communities that are represented by a regional district or improvement district, may be incorporated as new municipalities, or they may become part of existing municipalities through a municipal boundary extension or restructure process.

In the late 1990s, the province facilitated an incorporation study and through a public consultation process, an area of the Capital Regional District became incorporated as a municipality in December 1999. This area is now the District of Sooke.

Declaration of Election by Voting

For inquiries related to campaign finances and advertising:

The following is information provided by the Government of British Columbia, Local Government Branch:

General Local Elections are the most direct way for the public to influence their local government by determining the individuals who then make decisions and govern on their behalf following general voting day.

During the election process, candidates generally outline their platforms and objectives if they were to be elected.  By choosing the candidates with the ideals and qualities that are most acceptable to the electors, citizens can directly influence the nature of the community where they reside or own property.

There are several documents and guides available to help provide information and answer your questions:

To be eligible to run for local government office in a general local election or a by-election, a person must have been a resident of B.C. at least six month before filing their nomination documents.  They do not have to live or own property in the area where they are running for office.

In addition, a person must:

There are new campaign financing rules for candidates as of the 2018 General Local Elections.  The new rules are summarized in this Elections BC Bulletin.

Please note candidates are also required to file financial disclosure statements when they file nomination packages, annually while in office and upon leaving elected office.

In order to vote as a resident elector you must:

In order to vote as a non-resident property elector you must:

For more information, please see the Voter’s Guide to Local Elections in B.C.

If you are not on the Voter’s List, you can register at the above site online or update your information.  You can also register as an elector at the time of voting in the District of Sooke election.  For non-resident property electors, please contact the Chief Election Officer to register.

To register to vote as a resident elector at the time of voting you will need two of the following identification documents showing residency and identity, and one must contain a signature:

*If you have a combined BC Driver’s Licence and Service Card, it counts as only one piece of identification.

To register as a non-resident property elector at the time of voting you will need proof of property ownership and identification:

The next General Local Election for mayor, councillors and school trustees
will be held on Saturday, October 15, 2022.

Local government elections in British Columbia are held every 4 years.  In Sooke, these include the election of a Mayor and six Councillors to the District of Sooke Council.  Elections are conducted in accordance with the rules and regulations set out in the Local Government Act, the Community Charter, and the Local Elections Campaign Financing Act (LECFA).  The election of School Trustees is conducted by the Sooke School District.

See General Local Elections 101 for answers to basic questions about local elections in BC.

District of Sooke Logo and Coat of Arms 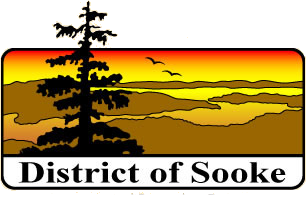 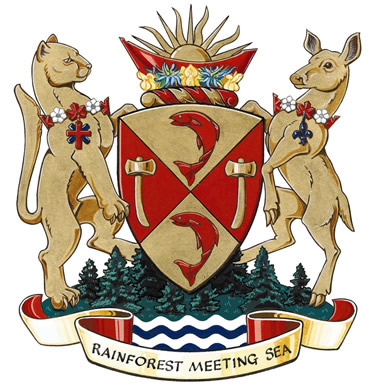 Armorial Bearings of the District of Sooke were granted by the Chief Herald of Canada on September 16, 2002.

The red and gold of the arms are the colours of Royal Spain and hence refer to the first European contact. Gold also symbolizes the wealth derived from the historically important industries of fishing and forestry which are represented by salmon and axes, and refers to the Leech River gold rush. The diagonal design of the arms echoes the basic division of the flag of Scotland and represents the Scottish who were the first European settlers in Sooke.

Crest (above the shield)

At the base of the design, “RAINFOREST MEETING SEA” is a shortened version of “Where the Rainforest meets the Sea.”

The compartment is a visual representation of the theme “Where the Rainforest Meets the Sea. The cougar is an important native animal and its collar refers to Sooke being a Canadian municipality in British Columbia. The pendent crosses are of England and Scotland, referring to British settlers. The deer is also an important native animal, while the fleur-de-lis refers to French Canadian settlers. The animals stand and the shield rests on a mound set with Douglas Firs rising above the sea.

All the powers of Council are exercised by bylaws, policies and resolutions. The Community Charter states that these decisions can only be made at regular, or at specially convened, Council meetings where there is a quorum, or fixed number of Council members present.

We have made available on this website some of the most commonly used bylaws and policies that apply within the District of Sooke. The policies provide direction on administrative procedures and help guide future decisions of Council.

Click here for copies of District of Sooke Bylaws and Policies.

Disclaimer
The bylaws on this web site are in most cases office consolidations. They are provided for convenience only and should not be used in place of the actual bylaws, which can be obtained from the Municipal Office. To have a bylaw mailed or faxed to you, phone us at (250) 642-1634 or e-mail us at info@sooke.ca.

We make every effort to ensure that the bylaws on this web site are accurate and contain the latest amendments; however, the District of Sooke cannot guarantee the accuracy of information provided.